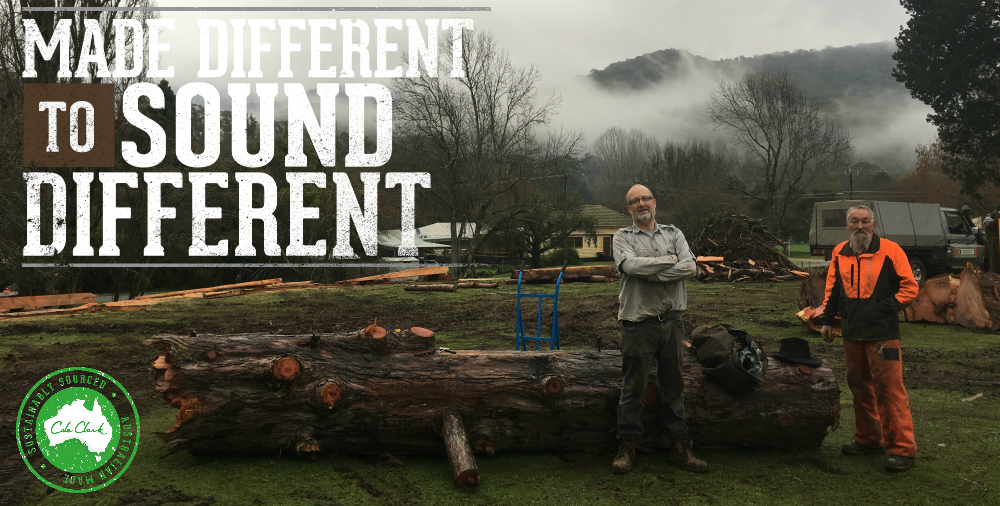 Many of these have become endangered as world human population has expanded. It is easy to find the status of all these timbers. All you need to do is Google “Red List” and put in the common name for the timber you are wanting to know the status of. It became illegal to export Brazilian Rosewood logs in 1967. Only 7% of the original Brazilian Rosewood forests remain. Many species including Indian Rosewood, Ebony, Cocobolo, and most Mahoganies are listed as vulnerable or endangered.

Spruce requires 250 year old trees to get two piece tops out of. The main source of Spruce for guitar makers is Sitka in Alaska. It has been reported that there is only a few years of this old growth timber left. The species is not endangered, but the old growth timber is limited. When this runs out guitarists will start to see three piece tops.

From the start, Cole Clark has made guitars that included many of these endangered timbers, but at the same time, we used the lessons learnt from guitar makers in North America and Europe and explored our own country. We looked for tone woods which are sometimes similar and sometimes unique to traditional tone woods. Sometimes they are the same species that are endangered in other parts of the world but sustainable when grown and harvested sustainably in Australia.

As of March 2020, Rosewood counts for just 1% of Cole Clark back and sides and 2% of fretboards. 3% of our fretboards are Ebony, which is also an endagered species. The rest of the timbers used by Cole Clark do not appear on the Red List of endangered species and are sustainable. Once we have run out of our current Rosewood stock, there will be no more, further advancing our sustainability aim.

All our guitar necks are made from sustainable Queensland Maple or Blackwood.

The search for a sustainable timber to replace Rosewood fingerboards resulted in our use of River Sheoak and Satin Box.

We are not FSC certified at this point. Right now we can produce a guitar with sustainable timbers which do not appear on the endangered lists for the same price as the non-sustainable instruments. FSC certification would make the sustainable models considerably more expensive. We hope to go down the FSC road in the future but we do not want to link sustainability with lack of affordability.